Startup Newlight Technologies, LLC, a California LLC based out of Costa Mesa, has pioneered an affordable carbon sequestration technology, called AirCabon, which essentially creates plastic material out of thin air. The goal of the technology is to replace ordinary oil based plastics.About Newlight Technologies, LLCIn 2003, co-founders Mark Herrema and Kenton Kimmel, graduates of Princeton and Northwestern University, started the company out of their parents’ garages. The company mission was to capture air based carbon which could be used to create usable plastics. This would allow for elimination of oil based plastics and also reduce air pollution.Today, a team of first class scientists and engineers work to produce an innovative product capable of completely revolutionizing the plastic industry. Team members at Newlight dedicate themselves to developing a commercially scaled, and affordable, product capable of reducing greenhouses gases and dependence on oil.How Is AirCarbon Produced?AirCarbon production is a multi-step process. In the capturing stage, air and carbon are captured and directed into a conversion reactor that the company has patented. Next, in the isolation stage, a device is used to separate and isolate carbon from the air stream. Lastly in the polymerizing stage, the isolated carbon will be reattached into a long thermopolymer AirCarbon. 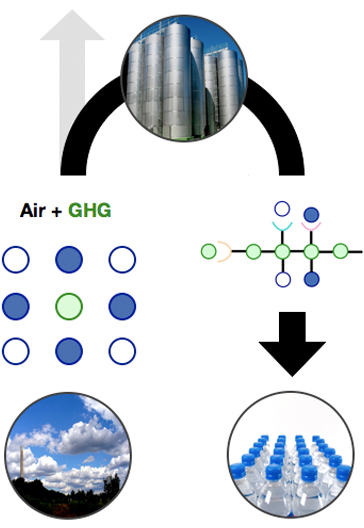 Process by which AirCarbon is produced (via NewLight.com).

The capturing stage works by capturing carbon, greenhouse gas, that would naturally dissipate into the air. These carbons include carbon dioxide generated in farms, water and plants and landfills. The captured carbon is then diluted with air and placed into a system developed by Newlight technologies.The system combines the captured carbon/air with a biocatalyst that creates the plastic material. By using their patented technology, Newlight technologies then harnesses the greenhouse gas and turns gas into plastic.Real Life ApplicationsNewlight technologies is currently creating products ranging from chairs to Sprint cell phone cases. Newlight has also partnered with Dell, Inc., in an effort Dell’s desire to maintain 100 percent sustainable packaging products.Not The First In the Industry But Aiming to be the Most AffordableIn a recent CBS News interview, Herrera admitted that his company was not the first to come up with the idea of converting greenhouse gas emissions into usable plastic products. Rather, his company was the first to do so in a cost effective manner.Time will tell if this California startup will change the way plastic materials are made and have a positive environmental impact.