Just delivering your orders using drones wouldn’t be cool enough for Amazon would it? In its newly released patent application with the United States Patent & Trademark Office (USPTO), Amazon revealed its plans to use GPS technology to locate and track their customers, wherever they are, to deliver their packages.

In its detailed application for the “Unmanned Aerial Vehicle Delivery System” (UAV), aka drone, Amazon outlined the details of how drones will track their customers using information pulled from their smartphones. The information will be used to locate each customer, “navigate to the source location; engage the item located at the source location; navigate a navigation route to the destination location; and disengage the item.”

Simply put, the information will be used to locate each customer wherever they may be at the time of delivery, and deliver their package(s) to that location. If the customer moves, so will the drone.

How Does it Work?

The UAVs will receive “delivery parameters” and autonomously (or semi-autonomously) grab customers’ orders from either an Amazon warehouse or the 3rd party seller directly, calculate a route from the pick up location to the delivery location and transport the order aerially. If a customer moves from his or her original location, the UAV will automatically reroute to successfully deliver the package.

If there are weather or environmental factors affecting the route, the UAV will communicate with other UAVs in its area and provide updates. So for example, if there is rain, snow or wind that can harm flying, landing or traffic conditions, the UAV will let others in the area know. In addition if there are dangerous environmental conditions such as a busy road on route to the delivery location, the UAV will reroute to avoid the roads as much as possible and communicate the information to other UAVs. 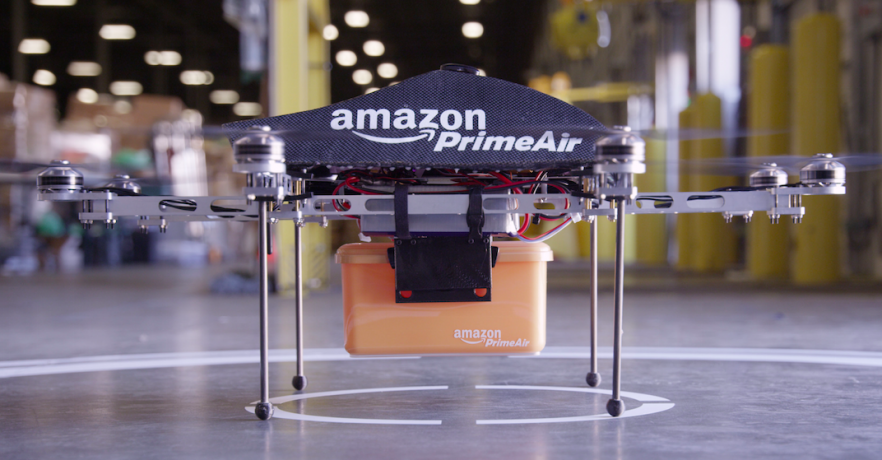 The information will be saved in a “central location” and used by other UAVs to plan appropriate delivery routes that avoid the obstructions or modify their navigation if necessary. The UAVs will also monitor for humans or animals that may be in their path to avoid hurting them during delivery.

Although the UAVs are created to be self sufficient and operate without human intervention, pilots may sometimes be used to help during landing. The information can be saved and used during the next delivery for a purely autonomous delivery.

Setback From the FAA

When news initially broke out that Amazon planned to use drones to deliver packages in 2013, skeptics everywhere voiced their opinions. Some said it was a marketing scheme for the major retailer while others were concerned with safety issues. The FAA also pushed back by not allowing proper testing and carrying strict restrictions.

Therefore, until recently, most of Amazon’s testing of the UAVs have been done overseas in the United Kingdom and Canada where testing requirements are more lax.

In March however, the FAA finally granted Amazon permission to begin testing in the U.S. but didn’t fail to make things a little difficult. The pilot navigating the UAV must maintain vision of the device from his or her remote location and it cannot be flown higher than 400ft above ground.

What’s in the Future for the Drone?

With Amazon leading the way in drone deliveries, there’s a lot of pressure on the FAA to allow for research and development. Attacked for being too conservative on regulations and delaying the development of drones in the US, the FAA is now making an effort to relax its regulations and allow more testing for other products.

Last week the FAA took a huge step by relaxing its regulations on drone usage, allowing “unmanned helicopters” to spray crops and making plans to partner up with CNN to use drones to collect news-worthy information in urban neighborhoods. The FAA will also now test drones that can be used to inspect railways far beyond a conductor’s line of vision.