An appellate court ruled that Amazon could be sued for trademark infringement on Tuesday, sending a major legal blow to the online giant in a lawsuit over the way in which Amazon displays search results for products that it does not sell. The appellate court ruling overturns a previous lower court decision and sends the case back to trial.

Multi Time Machine Inc. (“MTM”), which makes a “Special Ops” watch and other mid-priced timepieces, initiated the lawsuit. MTM claims that Amazon is violating its trademark by displaying its name in Amazon’s search bar while simultaneously not displaying MTM’s products in its search results. MTM, which does not sell its products on Amazon, claims that this practice confuses and misleads customers while simultaneously directing them to its competitor’s products. MTM also claims its being damaged because customers who search for its products on Google or Bing are often directed to Amazon search result pages that only sell its competitors’ products, leading to lost business.

Amazon, of course, disagrees with MTM’s claims, arguing that the product name and manufacturer is clearly displayed below each product picture and that no reasonable consumer would be confused or misled by its search bar or its search results. Amazon says that it never claims to sell MTM’s watches and it’s definitely not saying that any of the products in its search result are made by the company.

Here’s what customers currently see when they search for MTM watches: 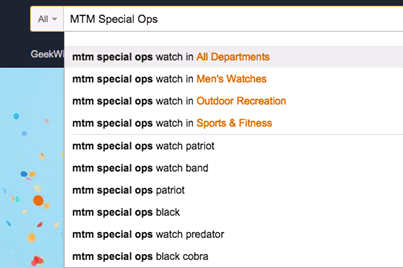 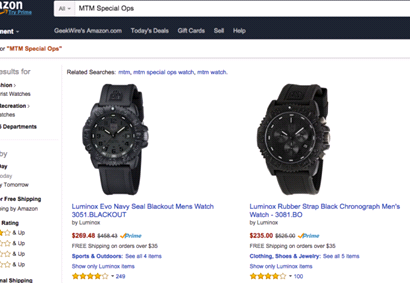 A lower court had previously held that this practice did not constitute trademark infringement and granted Amazon summary judgment. The 9th Circuit reversed this decision, finding that the practice could lead to customer confusion. Addressing a multitude of complicated legal factors, the 2-1 decision stated that shoppers could think that the MTM product was no longer available, or that Luminox and MTM were associated, among other things.

One judge dissented. He disagreed with the majority, stating that there was clearly no confusion possible and thus no possible trademark infringement. Because Amazon’s search results “clearly labeled the name and manufacturer of each product offered for sale, and even included photographs of the items, no reasonably prudent shopper accustomed to shopping online would likely be confused as to the source of the products.” He further likened Amazon’s practice to “what happens when you order a Coke, and are [then] clearly told that [the restaurant] only has Pepsi.”

The decision, of course, does not mean that Amazon has definitely lost. For now, it only means that the lower court’s ruling on summary judgment was inappropriate, and that the case should go to a jury for trial.

Nevertheless, the decision could have big implications for online retailers, even if Amazon ultimately wins. Importantly, it indicates that similar lawsuits at least have a chance of succeeding. As such, it may open the floodgates of litigation. As a result, other online retailers are likely to change the way users can search for products, or at least the way in which search results are displayed.

The case in the 9th Circuit is Multi Time Machine Inc vs. Amazon.com Inc and Amazon Services LLC, 13-55575.