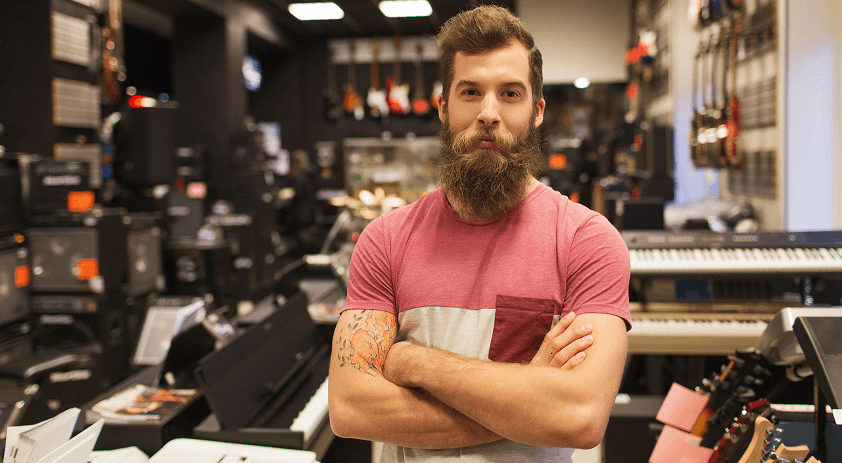 If you’re starting a band—or thinking of starting a band—chances are that red tape and potential legal hindrances are the last thing on your mind. After all, music is about music. It’s about personal expression. Not which legal entity owns the rights to your band name or logo.

But, for better or worse, the reality is that society does in fact care about things like that, and you would do well to bear these things in mind. And for the purposes of this article, by “these things,” I am referring to trademarks.

People who aren’t familiar with the “law” or haven’t gone to law school might not necessarily know what “trademark” means, beyond a colloquial context. But that doesn’t undermine the practical importance—necessity, even—of keeping trademark issues in mind when going about your daily business as a band.

A “trademark” is something that distinguishes your good or service from other people’s. You know that the album you just purchased is by the real “Imagine Dragons” because the artist is clearly labeled, and no one else can use that name to sell their music, because that would be confusing or deceptive to the consumer.

And that’s the thing about trademark: the standard is likelihood of confusion. This is another way of saying the two “marks” do not have to be identical. Naming your band “Imagined Dragon” is not gonna fly.

ALSO SEE: How To Lose Your Trademark, 4 Common Mistakes

Also, importantly, a logo can be a “trademark” too. Basically anything can be a trademark, but in the band context, the two major types will be band names and logos.

So, from the outset, and with these definitions in mind, I have listed some of the major trademark considerations every band should keep in mind.

1. Does someone else own the rights to your band name?

Don’t ignore this consideration just because you have already settled on a name. The name you’ve already settled on, or a “confusingly similar” name, could very easily be taken already. It’s critical that you conduct a comprehensive search to ensure the name is definitively available.

There are, of course, many ways to do this search. Google is a good start; industry directories can help; licensing organizations like BMI or ASCAP can help too. Another important search tool is the USPTO’s database itself.

Even that can be tricky, though. For example, “confusingly similar” band names won’t pop up in your verbatim searches, but will still be every bit as damning to your brand.

Many bands choose their names purely on aesthetics. Don’t do that. Keep “distinctiveness” in mind—the colloquial phrasing would be “google-ability.” If someone has to enter other search terms in google in order to find your band’s website. You can google “Imagine Dragons” and their band will be the top hit. The same probably isn’t true if you name your metal band “Oblivion.”

Carefully choose and search for a name for your band and strongly consider hiring a trademark expert to help you. A trademark attorney can assist you with the search, analyze the search results and help you avoid major headaches in the future.

2. Establish who will “own” the trademark.

This one can be very tricky, and there are lots of ways to go about it, but consider a written, express agreement between all members of the band that specifically lays out who has rights in the band’s name and logo.

But what to put in the agreement? Again, there are many ways to decide who gets to use the band name. Maybe the lead singer “owns” it; maybe the founder of the band does; maybe the principal songwriter; maybe all current (or founding) members of the band get it; maybe all current members but only while all are together; maybe if a majority of the original band is together (say, at least three out of the five founding members) then that majority may use the name; maybe no one gets rights in the name if the band splits up, even if only one member walks.

Better yet, before registering a trademark, the band members can create a legal entity like an LLC and have the LLC hold the ownership of the trademark.

I know it’s unpleasant to think about contingencies like this, especially if you’re just starting out. But much better to have everyone on the same page from the get-go.

3. Register your trademark as soon as possible.

Although you are not required to register a trademark with the U.S. Patent & Trademark Office (USPTO) in order to get “rights” in the trademark, registration does confer many benefits.

So if someone else has registered your band name already, it doesn’t really matter if they have “made” it yet or if you have heard of them by word-of-mouth. They get rights to use the name, and you don’t.

It’s true that registering isn’t free—it can be expensive, especially if you involve a trademark attorney. However, you don’t want to spend a lot of time and resources now, while pouring money into your band’s brand, with a name you ultimately have to change. Better to spend that money on proper registration up front than to waste all that money and risking your entire brand.

I alluded to this before, but trademark rights in the U.S. don’t necessarily materialize upon registration, but rather upon use. Even if you register, your use of the band name/logo is what’s key. Use the band name. Early and often. Use it on everything—CDs, t-shirts, posters, stickers, advertisements, performances, everything.

ALSO SEE: What is a Trademark Specimen?

And keep a record. In case you can’t afford registration yet, or otherwise don’t want to register (yet) (I would strongly advise you to register as early as you can), keeping a detailed record of your use of the mark (band name or logo) is great evidence of your rights in the mark as against others.

So, if, say, someone else comes up to you claiming that you stole their band name, you can just point to your hard-drive full of evidence that shows you’ve been using the mark “in commerce” (that is, in public) for years.

This one is more applicable for those who have already registered, because it’s far easier (and legally justified) to enforce your registered trademark than any unregistered one. But what’s important here is that “enforcing” your rights doesn’t necessarily mean “sue, sue, sue!” Cease-and-desist letters are a cost-effective way to police potential infringers, too.

Of course, to “police” such uses requires you to stay diligent. Such policing helps with establishing that your mark, simply, is “valid,” and therefore has any rights to begin with. So just keep this one in mind too.

In all, remember to carefully research the band name you hope to use; then, try to register with the USPTO as early as you can; use your band name (early and often); keep records of your use; consider who will own the trademark ; and make sure to stay on the lookout for other people who might be using your name.